Writing during times of stress and emotional turmoil

Writing doesn't come out easily when the mind is distressed or depressed about something, your whole thinking power is occupied by that one worrying thought which tries to monopolize over all other emotions of the psyche. There is fear of losing something or some work not getting done, then there is anger or even a touch of hatred toward those responsible for halting your work, there could be annoyance and sadness too. 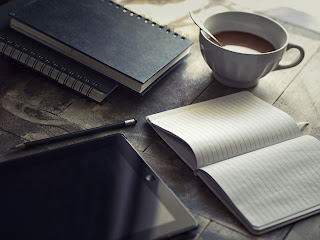 But the one who is capable of writing even in these depressive times is the one true to the craft. That one has the potential to become a future JK Rowling or John Grisham. But why are our minds so fragile? Babies and animals who are capable of thinking just a few coherent thoughts with difficulty seem to escape the consequences of stress and depression quite easily. Of course, when there is barely any thinking capacity, how could there be any stress.

Is mind itself the problem then? The fact that we are able to think about our thoughts and worry about our worries itself is to blame? The majestic power and complexity of our brain itself has become problematic for its own good ironically it seems.

But there are ways to overcome that, isn't it? Ways like mindfulness meditation and leaning toward spirituality. Dwelling on the fact that whatever be the intensities of sukha (happiness) or dukkha (miseries) in this life, one fine day its guaranteed to end and you are bound to start the otherworldly journey. All material assets and non-material emotions and relationships must be left behind, that one journey is always taken by every human alone. What you might carry forward is perhaps your karma and deep seated tendencies of the mind. Instincts and deeds done during deeply emotional times will probably get stored on the microchip of the soul forever (or until such time when it gets erased by compensating deeds in a future life).

The beautiful thing about writing is that you can use any kind of emotional energy to power it, Dostoevsky's sad and depressive works are as much a popular fiction as Shakespeare's verses or Dan Brown's novels. Perhaps those going through difficult times will find Dostoevsky's works quite soothing and calming because one hurt soul has got the magical power to heal another. Its called the gregarious or herd instinct, humans need the trust and presence of other humans in order to be happy and this need especially increases during depressive times.

Why am I so stressful about a future situation, why am I getting depressed? To solve the worry problem, the divide-and-conquer algorithm helps a lot:

If you stick to the divide-and-conquer algorithm for all problems in life, you'll find yourself a much happier and healthier person overall. And if all doesn't go well, then no worries - dwell in the spirituality as mentioned earlier. We are humans and we make mistakes, we come here to learn and learn, again and again. One thing you can do in this situation is to keep writing stuff and document your thoughts. Not only will it free you of the stressful toxins the mind may have developed, it will document your stress and worry on the sands of time. Sooner or later, some force of the universe is bound to read it and help you with your problem.

on September 17, 2020
Email ThisBlogThis!Share to TwitterShare to FacebookShare to Pinterest
Labels: Creativity, Writing