Milk Tea or Chai (as its often called in India) is a must have for some in the morning and many of us simply can't imagine a life without it! Its probably one of the easiest to prepare beverages with only four essential ingredients needed: 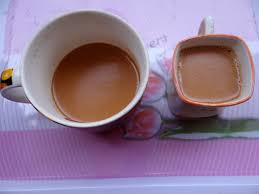 This is the traditional or "old school" way. For each cup of tea, you take one-third (or 30%) of milk and fill the rest of the cup with water. You then add one teaspoon tea and one teaspoon sugar to this mixture.

You then pour that mixture in a utensil and bring it to boil on a gas stove or induction cooker. After that, you pour the mixture in a cup using a strainer so that the steamy hot tea is then filtered from the soaked tea powder and you may serve it hot!

If more cups are needed, just multiply accordingly. For two cups, for example, take just over half a cup of milk and fill the rest with water. The proportion of milk should always be 30% of the overall quantity. Also, take two teaspoons of tea and sugar instead of just one. 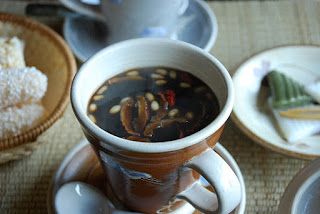 This method has grown a lot more popular lately due to the highly increasing phenomenon of lactose intolerance globally. 30% of milk for each cup of tea might be too much for some, especially those who are allergic to large quantities of milk due to lactose intolerance.

In this method, you fill almost  entire cup with only water with barely a few millimeters of space left on top for a couple teaspoons of milk (which is only needed to bring a tinge of color and taste in this method).

You pour the cup of water in a utensil, then add a teaspoon each of sugar and tea powder, then bring this whole "decoction" mixture to boil. Once it starts boiling, just add a little quantity of milk until the mixture turns into a brownish tinge from black. After that, just filter it using a strainer and serve hot.

An important thing to remember about this method is that how long you brew the decoction is crucial and a matter of optimization. Do it too much and you'll end up with a strong but bitter tasting tea as tannins get released (which might also give you digestion issues). But do it too little and you'll end up with a very light or pheeki chai which doesn't taste good either. The right optimization will come with experience!

Chai prepared using either of these methods tastes really wonderful and for a tea lover, it shouldn't really matter which method was used for preparing the tea! However, due to increased prevalence of lactose intolerance across the world, I think the second way should be preferred for better health and well being.

And finally, along with the tea powder and sugar, you can also optionally add tasteful ingredients like tea masala (spice), cardamom, ginger powder, etc. which add great taste to the final outcome.

on November 29, 2020
Email ThisBlogThis!Share to TwitterShare to FacebookShare to Pinterest
Labels: Food, Tea