I've recently come to realize that double-edge safety razors are not only the cheapest or cost efficient, but they are also the best way to shave for men. Instead of spending huge bucks on costly branded razors like Gilette Mac-3 or Gilette Fusion which cost hundreds of rupees, why not use something like Super Max or 7'O Clock which cost only a fraction of that amount?

But one problem people usually have with double-edge razors is getting confused between the two sides and forgetting which one was last used. Now, there are two sides to the razor blade and each one is typically marked as 1-2 and 3-4 on their edges respectively. The most common technique is to use the first side (1-2) for shaving once, and the second side (3-4) for the second shave. That way, we will know that if a used razor is left wrapped in a cover (or along with our shaving kit), we must have already used the 1-2 side and now we should use the second one (3-4). 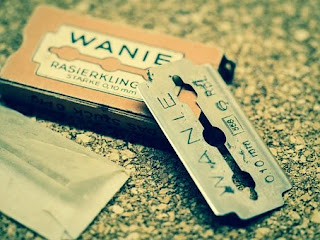 This is a good technique which I myself used until recently but the problem is that the entire blade will give you just two shaves whereas it should give you at least 4 to 6 shaves if used optimally. The trick to optimal usage is that you should not start shaving immediately after lathering but wait for the lather to soak a bit so that your hairs become soft and easy to cut. About 3-5 minutes of waiting time is enough to get a smooth shave.

Coming back to the topic, instead of using each side once, its better to use the below protocol which can give you 4 shaves with each blade:

2. On second shave, use the second side (3-4), then clean and put it back in the razor itself with first side up.

3. On third shave, use the first side again, then clean and put it back in the razor with second side up.

4. On fourth shave, use the second side and then dispose it.

Based on where and how you store it after the shave, you'll get cues about how old the blade is and which side to use next. Assuming you shave each day, after shaving on the first day, you put it back in the pouch or cover, so you'll know on the next day that its just used only once.

Once you remember this protocol, you'll be able to get two more shaves out of each blade which means you'll have to spend less on shaves which in turn means lots of savings in the long run!