"Free Will" is an illusion: Your Life runs on a pre-destined Trajectory

People are usually under the impression that they have some kind of "free will" or volition, as in they are independent to do anything they wish (to the extent of using their motor functions or practical abilities). But do you have any concrete evidence of such a free will existing, all you have is a feeling that you are the doer or cause of the signals being sent to your motor functions through your nervous system.

But feelings can be great deceivers as it can be observed with all kinds of feelings experienced in life! A glass of whiskey or vodka might make you feel that you are some kind of omnipotent super-human but such a feeling isn't reflective of the reality, it's only reflecting your delusion.

Another common way people "prove" that they have free will is by doing a random act like kicking a football or tennis ball, making a loud whistle, etc. and then saying, "See, I did this out of my own free will?". But such thinking is naïve because nothing happens "randomly" in this universe, every phenomenon is the result of a complex chain of cause and effects. Just ask yourself why did you kick the football? It's because someone asked you to prove that fee will exists. See, there is always a because preceding every event that takes place!

We can easily understand this using the cloud analogy. 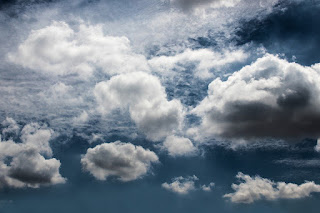 You see, unlike human who is a complex biologically evolved system equipped with seemingly magical things like consciousness, psyche, emotions, feelings and whatnot, a cloud is a simple system within the earth's atmosphere that works on very simple principles:

1. Evaporation: Sun's heat causes water to turn into gas and evaporate from earth's surface and causes it to go up and start condensing.

2. Cloud Formation: The evaporated water then starts forming these white objects of huge proportions called "clouds" which then start turning dark depending on the weather and season.

3. Rain: Finally, the clouds start bursting and the "evaporated water" starts turning back to liquid again which we call "rain".

Being a non-scientist, I may not have described this process with utmost accuracy using the exact scientific terminologies but you get the idea. Now, imagine for a second that this simple system called Cloud were to have feelings and consciousness just like us! What would the cloud think? Wouldn't it be thinking exactly the same things we typically think!

- "I'm traveling to Bangalore by the next wind, see you there if time permits."

- "Dude, I'm getting fatter by the day. Some flight may skim through me any day now!"

The exact same thing is happening with us. We think that it's "I" who is really doing these seemingly magical acts using "my free will" but it could all be an illusion, we don't even know whether such a thing called "I" even exists on the driver seat. I'm not saying that a soul or spirit doesn't exist, but maybe the soul is just a witness to what's happening? It's the nature or universe which is the causal force behind everything that happens around us, it's a far more absurd assumption to make that the soul is causing things to happen, especially when the soul is not even capable of knowing or proving it's true existential nature.

Another analogy or thought experiment (which is closer home to the AI fanatics!) is that of a computer or laptop. Let's say you schedule your laptop to perform a certain task each day at 10:00 AM. Now, if your laptop had any feelings or consciousness, wouldn't it be thinking "It's me who is toiling hard with this laborious task every day at 10:00 AM. I ought to get some compensation for this!". The laptop will never realize that it's YOU (the programmer) who has put the laptop on a set (or pre-destined) trajectory which will always end up in causing its "motor functions" (CPU) to do that task every day at that set time.

Maybe some exception could be made in case of an extremely evolved soul like a Buddha or Sankaracharya or Madhvacharya who is able to attain such level of enlightenment where the set trajectory could be changed to some degree. But again, that's not necessary. Could it be the case that the Buddha was already destined to be the Buddha even before he was born just like a Cloud in the earth's atmosphere?

That's a good question to fathom. Imagine that you are a programmer and your developed program becomes so intelligent one day that it figures out not only who has written it (YOU) but also how to change the execution path (bits and bytes) on its own!

After some heated debate about this on a reddit thread, I've posted another article where I explore the viewpoint of compatibilist, someone who is able to synthesize with the conflicting views that both free will and determinism could be a fact of life.